While other types of environmental pollutions are known to been decreased with time due to persistent efforts by organizations all over the world, noise pollution has increased in contrast. This has become a very serious problem as noise pollution not only has direct but cumulative adverse effects on the health of the people who are continuously exposed to it. Over-exposure to high levels of noise pollution indicates poor quality of life for residents of large metropolitan cities. Additionally, the growth of the urbanized cities, in terms of population and social and economic development has also played a major role in increased levels of noise in the cities due to industrial innovation; and increase in vehicles which have resulted in more congestion and traffic on the roads (Okwechime 2015).

This paper will take into account the various factors that have contributed to increasing noise pollution and its effects on the quality of human life. Furthermore, steps that need to be taken for the reduction of noise pollution will also be discussed.

An increase in levels of noise pollution has been termed a growing health hazard by researchers all over the world and has been known as an environmental stressor due to its continuous presence in the form of traffic jams and congestion on roads in addition to increasing in construction sites and factories in large urban centers of the world. Technological developments, population growth, and rapid expansion of housing societies have also played a vital role in increasing noise pollution (Muller 2016). The following figure shows different types of pollutions and the health effects they have on human life:

By looking at figure 1, it can be observed that even though noise pollution has become a problem for the residents of large metropolitan cities, it is still ranked as number fourth according to Environmental pollution control. As mentioned earlier, noise pollution has shown adverse effects on human health in the form of physiological as well as psychological disorders because if a person is subject to a continuous noise of about 85-90 dBA, the person may lose his hearing in a progressive manner (Muller 2016). The effects of noise pollution vary according to the type of noise, its severity, and the degree of magnitude that a person is exposed to. Following are some of the very common noise levels that a person living in an urbanized area experiences;

Figure 2 shows why noise pollution is regarded as a prime issue in decreasing the level of quality of life in urbanized areas globally. An increase in noise pollution can primarily be attributed to increasing in the number of cars as well as the industrialization of the cities as disturbing levels of noise level has been reached by main arteries in major cities. Therefore, this has led to people preferring to live in the suburbs of the city instead of living in the main hub of the city. This has given rise to urban sprawl as well (Yuen 2014).

Furthermore, the effects of noise pollution are divided into four main categories as per volume and duration of the noise levels. These categories are:

Figure 3 demonstrates the most common effects of noise pollution on human health. Studies have also shown that most of the urbanized cities of the world have exceeded the standard limit of noise and have played a significant role in the deterioration of the health of residents of these cities. Other factors that contribute to increasing noise pollution in metropolitan areas include an increase in traffic volume and congestion, planning disorderliness, urban sprawl, and unplanned urban development by the private sector.

While studies have been conducted regarding the effects of noise pollution on human health, very little information is present related to the mitigation and control of noise pollution. Measures need to be taken for reduction of noise levels near major transport facilities such as train stations, airports and bus stops. As noise pollution has been termed as one of the most significant drivers of reduction of the level of quality of life in urban areas, it has made the urban centers of the world unsustainable, non-conducive for living, and unhealthy. For a city to be sustainable, it should be well-able to provide all the basic economic, social, and environmental amenities to its residents without endangering the sustainability of its social systems as well as its built environment and natural set up (Yuen 2014). Based on this concept, the following image shows the permissible levels of noise during day and night time:

Since noise pollution has a significant effect on the quality of life, the key features of sustainable development, according to the European Union‘s Fifth Environmental Action Programme are listed as follows:

Some several methods and approaches can be implemented for abating the high levels of noise pollution in the major urban cities of the world like; noise mapping, controlling noise at its source, prescription of noise limits for vehicles, and continued maintenance of the main arteries of the cities (Ogneva-Himmelberger 2009).

Mapping of noise can be defined as the spatial dissemination of different noise levels at different areas in a city. The main purpose of noise mapping is that it allows efficient visualization as well as imaging of the noise disseminations in those regions of the city where the land-uses might be especially sensitive to noise pollution. Additionally, mapping of noise proves very helpful in the assessment method used in urban areas and can help in pointing out the areas where noise levels are exceeding the standard limits (Ogneva-Himmelberger 2009).

This tool plays a very significant role in preserving the quality of the environment as far as the reduction of noise pollution is concerned as it helps in demonstrating a comprehensive account of the issue, its sources as well as its receptors, and the effects this issue have on the receptors (Fadil 2012). Following are the main advantages of noise mapping:

Thus, noise mapping can help in recording the level of noise in different locations and the remedial measures that can be taken for the reduction of noise where it exceeds the standard limits. In general, the suburban area of any urbanized city is subject to low levels of noise but this phenomenon has changed as major arteries pass through these suburbs which also results in creating sources of environmental noise pollution in these areas. Additionally, in the center of the city are located different land-uses like markets, office building shops and higher volume of traffic, this gives rise to levels of noise naturally and people are exposed to these high levels of noise sources. Noise mapping can help in determining whether or not these noise levels are by the standard as prescribed by WHO and other organizations (Fadil 2012). The following figure shows the recommended standard of level of noise permissible in a city: 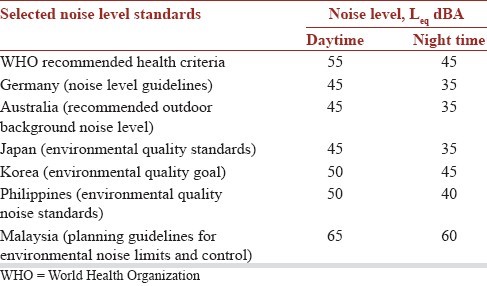 Figure 5: Recommended standard of level of noise permissible in a city (Source: Yuen 2014)

Controlling Noise at the source

The main sources of noise in a commercial hub of a city are its engine, exhaust, transmission, as well as suspension. And these sources produce the highest levels of noise while braking, accelerating, on rough roads, during upgrades, and in conditions where the traffic continues to stop and go over and over again. Other than these sources, another factor that contributes to increased traffic noise is the poor maintenance of vehicles by their owners. Noise created by friction due to contact with the pavement by the tires is also a significant source of noise pollution in traffic zones. As these sources have been identified, different measures can be taken for the reduction of noise right at the source. These measures can include steps like the selection of a vehicle construction that does not produce high levels of noise. In addition to this, good maintenance of vehicles, selection of better tires as well as exhaust systems can play a vital role in the reduction of noise pollution that is resulted due to poor maintenance and other factors mentioned before (Rao 2003).

Recommendation of Noise Restrictions for Vehicles and Traffic

Several various factors are used for determining the level of noise produced in a region. This includes; the constancy of flow, the total figure of automobiles passing in a given unit time, type of automobiles passing the region, the level of upkeep of the automobile, stop-and-go traffic conditions, and speed limit. One solution for the reduction of levels of noise pollution is to prescribe noise limits for automobiles in the region. Additionally, a ban on honking in some of the most sensitive areas can also be implemented which will help in mitigating the issue of noise pollution to some extent. Additionally, honking can also be banned in residential colonies, amusement parks, hospitals, and schools. Furthermore, buildings can be redesigned to make them noise-free to some extent which will help in creating a pleasant environment for its users and will elevate the quality of life for those people (Benesty and Chen 2011).

Another step that can be taken for the mitigation of noise pollution is the plantation of trees as well as shrubs. This will create a buffer zone between the traffic and pedestrians in a commercial center of the city and will provide a psychological benefit to the people by decreasing the apparent annoyance of traffic noise. Furthermore, the plantation also helps in softening the appearance of the surroundings and results in reducing the level of stress in people created due to noise and air pollution (Benesty and Chen 2011).

The physical features of any road surface, as well as its surrounding setting, can play a very significant part in defining the noise output of that area. Well-maintained and smooth textured carriageways and roads are not as noisy as the ones that are damaged, cracked, or patched. In addition to this, expansion joints that are installed in bridge surfaces are particularly noisy. Roadside surfaces such as curbs and pavements and vegetated soil are very likely to absorb as well as help in moderating noise, whereas reflective exteriors such as asphalt and concrete do not have this advantageous function. In case concrete or asphalt is used as a finishing material on the road surface, doubling the distances in the middle of the road and the receptor can help in decreasing the level of noise by 3 dB(A) (Benvenuti and Bretzel 2017).

What is Crime control model and How it works?