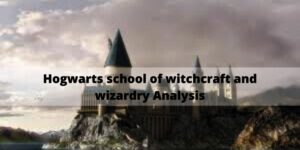 This report analyzed the Hogwarts School that is presented in the Harry Potter that is one of the most favorites and recognized film, and most of the students want that this school exists in reality, and they will get the chance to learn from this school. So, in this report, we analyze this school, its location, the school outlook, the life of the students in the school, teachers, grounds, the exterior of the school, etc. to know how exactly it is and how anyone made a school like this in future.

The Hogwarts schools of the wizardry and witchcraft Analysis

The Hogwarts schools of the wizardry and witchcraft are the fictional school of British that is presented in the Harry Potter. It’s the magic school for the student’s age eleven to eighteen. It’s located in Scotland and owned by the ministry of magic. The head of the school from 1960-1997 was Albus Dumbledore, 1993 McGonagall, 1997 to 1998 Severus Snape and 1998 to present is Dolores Umbridge (Wohlberg, 2005)

This school attained the rank of 36 among the best Scottish educational institution in 2008 online ranking in which it was added in a list of school as the school for fun as the independent category and then attainted high votes from all over the world voters (www.scotsman.com, 2008)

Location and the information about the school

The Hogwarts School is located somewhere in Scotland from where the Duff town is much near. The Hogwarts School portrayed as having several charms and the spells around and on it that made it difficult for the Muggle to locate the school at the exact location (Rowling, J.K., 2012).

The school has the castle-like setting that has the extensive grounds with the flowerbeds, sloping lawns and the vegetable patches, the large dark forest (that is known as a Forbidden forest), the loch (known as the black lake), the full-size Quidditch pitch and numerous greenhouses and the other outbuildings.

The school also has the lovely, the house where all the owls that the students and the school owned lived and placed with high caution. Some of the rooms that are presented in the school be likely to “move around or like this some stairs also have features to move around like the grand staircase.

The wizards and the witches cannot disapparate or apparate in the grounds of the Hogwarts school except when the principle of the school lifts the charm or the bell that is placed in the school, whether merely in the certain regions or for all over the campus, Therefore, as to made the school less at risk when it assists the principle to allow for the apparition (Rowling, J.K., 2012).

The Hogwarts School is the secondary school that is considered as the boarding school and has the coeducation system of schooling that takes the children from the age of eleven. In this school, education is not mandatory, with few students being homeschooled (Wohlberg, 2005).

In the Hogwarts School, almost one hundred students learn the different forms of magic and live in the school. The School has many classes and offers primary and higher education related to magic. The School has one big library and the dining room where all the students get their launch at the same time. The Hogwarts is the multipath school ( MuggleNet, 2005)

The admission process of the Hogwarts School

The admission at the Hogwarts School is made according to a selective approach as the school has the committee that is selecting the students after screening all the candidates. The committee selects the candidate who shows the magical ability at the time of the interview, and the squids are not allowed to attend the Hogwarts School as the students they are allowed to work in the school in the other roles like Argus Filch character does in Harry Potter (J.K.Rowling Official Site, 2012)

The Harry Potter film also shows that the school then sends the acceptance or the refusal letter to the children before 1st August. This letter also has a list of materials, for example, the uniform, spell books, and the other essential things that the students need in the school during their stay. The potential students are predicted to purchase all of these things from the shops located in Diagon Alley, London.

While the students who are not financially well and not afford these supplies or materials themselves will receive the financial aid facility from the school. The students are also permitted to bring their cat, toad, or owl with them in School. The first-year students are not allowed to take their broomstick that is a magical stick used for flying (Rowling, J.K., 2012)

Transportation for the School arrival

Houses or residence in Hogwarts School

The Hogwarts School is distributed into the four houses. Each of the homes has the last name of founders like Salazar Slytherin, Godric Gryffindor, Helga Hufflepuff, and the Rowena Ravenclaw.  Throughout the year of the school, all of these houses compete with each other for a housing cap, the losing, and the gaining points are based on the actions like the rule violations and the performance in the class.

The house that has the highest total points at the end of the year is considered as the winner, and this house color is put on a show in a great hall of the school for the succeeding year of the school. Each of the houses also has its Quidditch team, which competes with another house Quidditch team for a Quidditch cap.

The head is also responsible for providing important information to their students. It gives them punishments and also is responsible for responding to the emergency that occurs in their own houses and all other aspects related to the house. The new students are placed in these houses with the help of the sorting cap, as this sorting cap analyze the abilities and the personality of the new students and then sort it according to their qualities that match with the house.

After judging each of the individual qualities and abilities, the sorting hat places them in a most appropriate and suitable house. The student’s personal choices may impact the decisions like the choice of Harry Potter in the documentary or film. This concept of the houses in the unique idea in the school and their competition is also much impressing in the eyes of the people (Inggshttp, 2003)

Teachers and the Subjects at Hogwarts School

The Hogwarts School is the magical school, so numerous of the subjects that are taught at the Hogwarts School is different from the typical schools of the world. The few items that are teachers at the Hogwarts school includes the history of the magic that is derived from the muggle or non-wizard matter. Still, numerous others like the apparition and charms classes and subjects are exclusive to the world of wizarding.

The subjects that are compulsory to learn at the first five schooling years are charms, potions, history of the magic, herbology, astronomy, transfiguration, defense against dark art, along with the flying lessons. After completing the second year, the students of the school are also required to add at least two of the optional subjects in their syllabus along with the compulsory subjects that they will learn in the third year.

In this, the students have five choices of the subject from which they have to select at least two subjects to learn as elective subjects. These courses include care of the magical creatures, Arithmancy, divination, muggle studies, and the study of the ancient runes. In the final two years, the other subject like alchemy is also offered to the students if there exists sufficient demand for these subjects from the students (Rowling, 2012)

The life of the students in the Hogwarts School is highly disciplined and attractive. The day of the students at the Hogwarts School starts with the breakfast that is served in one place means in a great hall. In the great hall, the four houses students have different areas, and students sit at the specific place or table of their own house and will eat, socialize and finish their homework.

The principle eats with the teachers of the school at the great table that is placed at the end of a hall. During breakfast time, the owls bring the posts of the students, usually consisting of a Daily Prophet, the letters from the friends and parents of the students, and the packages from the student’s home.

The bell ring at 9 am that indicates that the first class starts. All the students then leave the great hall and go to their respective categories classes to attend the lectures. In the morning, there exist two long classes with the short breaks between these classes for the students to come to the next class. These ends at 12 and lunchtime start after the launch the classes again started at 1 pm, and there is the break time in the afternoon for teatime, and then other types of classes began.

All the classes are approximately one hour. The classes end at 5 pm while the students of the first year get the afternoon off on Friday, and 6th and 7th year students have many free periods in the week. The students eat their launch in the great hall in the evening and then go to their rooms. But the classes of the astronomy take place at the night time in astronomy tower (Inggshttp, 2003).

It is concluded that Hogwarts School is a fictional school that is difficult to establish in reality. Still, it is a highly attractive and unique style of school that is well disciplined and arranged, as portrayed in one of the Harry Potter films. The film clearly shows that the lifestyle of the students, teaching style, and the setting of the school are much active that ensure the excellent performance of the students and make them a valuable asset for the community.

Inggshttp, J. (2003). “From Harry to Garri: Strategies for the Transfer of Culture and Ideology in Russian Translations of Two English Fantasy Stories. Meta Translators’ Journal, 48(1-2), 285–297.

Rowling, J.K. (2012). How do you remember everything from different books when you are still writing the HP series? Retrieved from https://www.jkrowling.com/textonly/en/faq_view.cfm?id=108

Tags: Analysis of the Hogwarts School, Hogwarts school of witchcraft and wizardry

Nine Lessons in The Wealth-The Millionaire Next Door Summary

Between the World and Me Summary

When Spending Become you Summary