Dimensions of Covid-19 Effects with Regards to Geographical Difference

From the onset of Covid-19 Pandemic, there seems to be a significant difference in the effects of Virus for different geographical locations based on different continents. Although the virus started from China which is located in China. However, in current days we are witnessing the dreadful effects for Europe and America more than any other continent including Asia.

The underlying reason behind this difference is not the scope of this study. This study is aimed at confirming the difference in the form of confirmed cases, deaths, and deaths rate. That information will be analyzed and presented visually in the form of graphs and tables.

Q1: Is there any difference in the number of total cases from different continents?

For this purpose, the number of confirmed cases against their geographical location were selected from the data set. Cases were pasted in the row side while the while the continent were pasted in the column side. Continent names were colored differently to present the stark differences present.

The visualization for this data is given below: 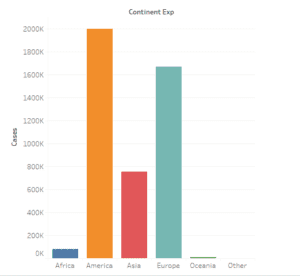 From this graph it is clear that the there is an overwhelming difference between the continents with regards to the total number of confirmed cases. It can be seen that majority number of cases have emerged in America where the number is 1,997,510. Europe has the second the greatest number of cases with the number of around 1,666,892 cases. Asia has 751,862 cases while Africa has just 78,432 cases. Oceania got 8,444 cases while only 700 cases are recorded in other areas.

There might be number of reasons for this difference in number of cases. It is entirely possible that the more cases might be present in any other continent than America. However, due to a smaller number of tests the cases have not been explored. Immune system strength relative to different geographical locations might also have played a role.

Q2: Is there any difference in number of total deaths from different continents?

For this purpose, the number of deaths against their geographical location were selected from the data set. Deaths were pasted in the row side while the while the continent were pasted in the column side. Continent names were put in label and color tabs to present the difference. At the end, the bubble form of presentation was chosen.

The following visualization was obtained from the data above: 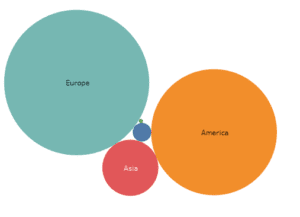 Q3: Is there any difference in death rate from different continents?

The visualization obtained has been given below: 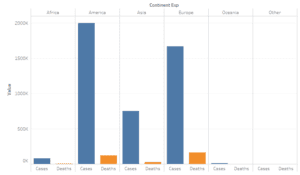 There might be number of reasons regulating the death rate, like the availability of hospitals and medical facilities as well as the general immune strength of the population. Different strains of virus might also pay some role in this regard.

There is a need to further investigate these facts by comparing data for other variables like a number of hospitals and medical facilities against the number of deaths or the deaths that might be related to age groups. So, age groups must be investigated to further build a correlation between such variables. So far, in this study, we have already established a correlation between differences in the number of cases and deaths spanned over different continents. Further studies will reveal in-depth information.

Reflection on the Past Essay

How to Write a Descriptive Essay? A Detailed Guide