In 2013 by revenue, Nintendo was the largest video game company in the world that has brought several iconic figures for instance Donkey Kong, Mario, and Samus. The company was the industry leader since the 1980s with its continuous and enduring product line contributed a significant role in the emergence of today’s multibillion-dollar global gaming market. But currently, this Japanese company is facing intense rivalry and competition from its two major competitors including Sony and Microsoft; still, Nintendo is thriving to sustain its position in the market. Lethargic sales of gaming consoles and a runny handheld market more and more dominated by Smartphones and tablets put Nintendo in complex and challenging situations than ever before (Whitehead, 2014). Hence, this research proposal proposes an investigation on why Nintendo is considered an underperforming brand, the challenges being faced by Nintendo, the factors that are contributing to its declining demand, and the possible suggestions that could help the company to sustain itself in the market.

Nintendo was founded by Fusajiro Yamauchi in 1889 in Kyoto, Japan, and is considered the world’s oldest video game company. In the beginning, the company created card games (flower cards) named “Hanafuda” but from 1960’s the company ventured into several diverse business projects but failed in many filed and finally landed in the profitable video game industry, where the company was able to make its strong position and history. Over time company introduces different kinds of games, characters and consoles like Magnavox Odyssey, which was the first commercially sold video game console but didn’t gain much popularity, and then came Atari‘s Pong game. By the 1970s, eventually, the company was able to become one of the most dominant players in the industry and was ranked as the third most valuable listed company in Japan has a market value of above US$85 billion. However, the company was not able to sustain its competitive advantage as its products were copied by various other competitors in the 1970s. In 1975, Nintendo entered the video arcade game industry with its EVR Race but experiences little success. In 1977, Nintendo initiated to manufacture its own hardware with its five distinct styles of Color TV-Game home video game consoles. Finally, in 1981, the release of Donkey Kong altered Nintendo’s fortunes significantly. This success offers the company several licensing opportunities for their own products which gives the company a dramatic boost in sales and profits. This game also brings in an early iteration of Mario identified then as Jumpman. In 1983, the Family Computer was launched by Nintendo. In the late 1980s, the company launched the new versions of its prior games including Super Mario World, Mega Man X, Super Castlevania IV, and others. (Erbland, 2014) 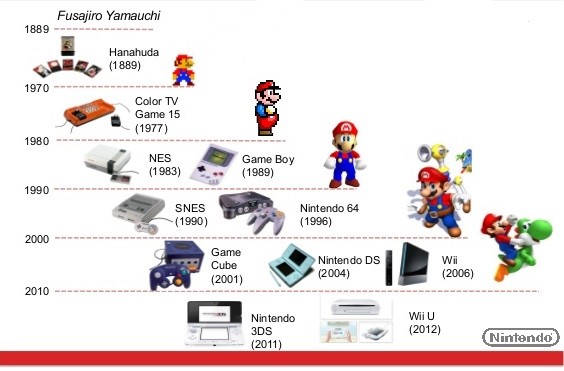 These Super Nintendo (SNES) helps the company to overcome the tough competition given by its rivals Sega. Nintendo celebrated one billion game cartridges sale in 1994. In 1995, the company came up with Virtual Boy which reveals disappointing results but the company swiftly recovers its sales with the Game Boy Pocket, the Nintendo 64, and the Game Boy Color. In 2004, Nintendo released its fourth key handheld system, the Nintendo DS, and in 2006 launches Nintendo DS Lite.  Both prove to be successful ventures and by the end of 2006, Nintendo released the Wii a game console and a competitor to the Game cube. In 2011, the company launched its Nintendo 3DS. Finally, Wii U was released in 2012 but despite the first eighth-generation console, the sales were not up to the expectation. Nintendo has battered stages of obscurity previously but has constantly recuperated stronger than ever. (Nintendo.co.uk, 2015)

Background of the Research problem:

Though Nintendo was the innovator in the video game console market the launch of the PlayStation 4 in 2013 has dragged Sony to take over the market leader in the video game console market. For the first time in eight years, Nintendo was beaten by Sony in unit sales where Nintendo’s console, the Wii U, proves to be a disappointment in making a linkage with consumers (Orland, 2015).

From April 2013 to March 2014, Sony was able to sell 18.7 million consoles against 16.3 million units of Nintendo. However, all companies in the game console industry experienced sales declines on the whole as gamers carry on switching from dedicated game consoles to Tablets and Smartphones. Portable console sales approximately declined 40% for Sony and 24% for Nintendo, whereas the home console sales drop 12% and 47%, respectively (Richter, 2014).

The rationale of the Research problem: 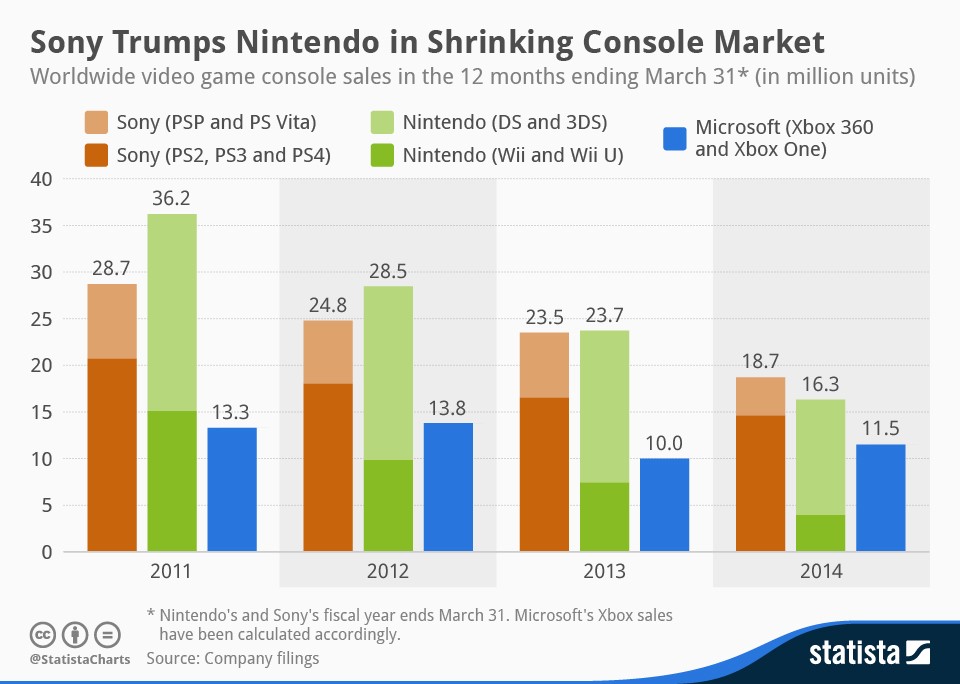 The above graph shows the declining market share of Nintendo over the years 2011 to 2014. Hence, the company needs to research to analyze the internal and external factors that are affecting the company’s current declining market position as well as have the potential to affect the company’s future sustainability. This will provide a clearer understanding of the main internal and external reasons behind the declining sales and market share and will help the company to analyze its core weaknesses and the threats that are adversely affecting the company’s current position along with identifying the opportunities the company could avail to regain its position in the market.

Based on the above situational analysis, Nintendo’s management decision statement could be:

“To regain the company’s declining sales and market share by providing the customers the best gaming experience.”

Based on the above management decision statement, the business research objectives are:

Following research questions are formulated to attain the findings of the research:

The research design selected for the current research is descriptive research which is concerned with the description of a population concerning essential variables. In this kind of study, the problem is clearly defined, with a specific hypothesis, and detailed information is required including the answers to the 5Ws (who, when, why, what, and where) of the research (Creswell, 2013). Further, this study will be based on a crossed sectional study which will involve the data collection through observation and survey. 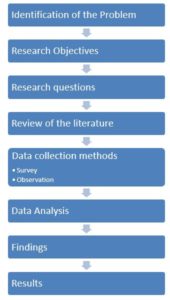 As the research is to be carried out at a larger scale and the findings need to be authentic and clear enough to provide a clearer picture to the researchers, therefore both quantitative and qualitative data will be collected. In quantitative research, the data is collected in the form of numeric and is analyzed through statistical methods.  While in qualitative data the data is collected in the form of detailed information, images, facts, and discussions. This helps in providing detailed information on the area of research while highlighting the minor facts as well. (Bradley, 2007).

For primary data, the population for the research comprises all the global gamers, therefore sampling will be done through which selected several gamers will be selected as the sample.

The research will further include determining the sample and unit of analysis, the measures by which customer types will be compared and contrasted, the data collection procedures, and the data analyses. The expected outcome of the research will show what type of customer on average is the most profitable for the business.

The rationale of the Research Design:

The descriptive approach of research design is selected to provide the company with extensive information on the consumers and market trends and to assist the company to know why, when, where, what, and who is affecting the sales of the company and how they could convert these factors into profitable factors.

Where Can I find Online Help for Business Assignments?