Costly medicines and pus in milk

The selected news article is entitled “Costly medicines and pus in milk: a Brexit trade deal that’ll make you sick” by Nick Dearden. The news article was published in the international edition ‘The Guardian” in April, 2018. This article is about the trade deal made between the UK and USA. The author says that the British nation is already fearful of the chlorinated water-washed chicken scandal; earlier, cows stuffed with hormones were also ignored. The foreign trade union shook with the epic news of medicines and pus in milk proved that the older news was just the tip of the iceberg compared to this news.

Hundreds of news articles and pages before this remained a prof of US exported stomach-churning list of foods to the United Kingdom. The article diverts the attention of health care physicians to the issue that more pus present in milk and more pesticides on vegetables will show another aspect of how the US government disgustedly regulates the big pharmaceutical industry. This deal will be accountable for threatening the NHS budgets and adverse for health and immune systems. From this news, it is obvious that the US badly dislikes the EU’s food policies. The US wants to export meat washed with antimicrobial wash as an alternative to keeping and killing animals in healthy situations. The US was also indulged in selling meat treated with steroids, hormones, and endocrine disrupters. US does not comply with the EU’s “cautious” approach, and continuously scandals like this in the international trade market highlight the US’s disgraceful image. In this scandal, basically, the US allowed more somatic cells in the milk, which the EU restricted. By introducing more white blood cells that weren’t done anywhere globally, this is late becomes a major cause of infection in cows.

An excessive amount of white blood cells indicates infections in the cows, but still, the US allows more amount of white blood cells in the milk. To justify such action, The US argues that they have nothing to do with it; however, it’s all about the customer’s choice. But that isn’t very honest because after importing this sort of stuff, it will definitely bring the standards down. Another reason is that any labeling that results in the customer’s obvious choice is seriously discouraged by the US. If all this situation makes u anxious, it becomes worse by looking at the treatment side of the whole situation. If we compare the price of the medicines in Europe and the US, the medicines are far more expensive in the US. Struggling for big pharma is still disagreeing with the limitations applied by the European Government on pharmaceutical corporations.

At first, the major complaint was a lack of valuable stakeholders’ input regarding these policies. As a result, an environment of doubts uncertainty and also can lessen the probability of future innovations. For example, in Britain, the NHS is not that powerful to negotiate the price of medicines. It also includes a framework tell about what is and what isn’t value for money. None of this is the Us flavor. And for sure, it has a minimal problem with the transparency the US has forced on pharmaceutical corporations to reveal drug trial dates. Drug checking is notoriously blurred with essential information refused by the public sector, making it even more difficult to examine the prices and efficiency of medicines carefully.

To simplify reality, if the US agrees on these important demands in trade dealing with the UK, it will allow the NHS to spend more money on drugs each year, and as a result, more patients would be having prohibited access to those drugs. There is news of the meeting between secretive US-UK trade working group led by trade secretary Liam Fox. It was a confidential talk, and we don’t know much about the conversation. Still, we know there was a brief discussion on “services, investment, intellectual property rights, and enforcement, regulatory issues.” It means all of the above changes in food and health care standards will be the price Trump charges for a trade deal with the UK. So public attention is badly needed on this issue, but there is good news regarding this situation.   First, Fox is wildly in harmony with the British public. An opinion poll is also released every week, which shows that 82% of Brits will not be having a trade agreement with the US. Hence, only 8% would put a beneficial trade deal. 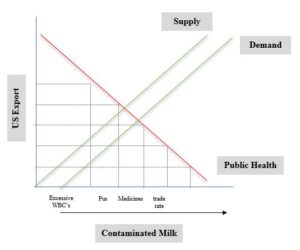 This economic model illustrates that with increasing US trade, of this pus and costly medicines contaminated milk, UK public health adversely affected. Demand for milk is higher. That is why to meet high demands; the US supplies a high amount of milk (contaminated). The probable reasons for UK public health decline include excessive white blood cells, pus, antibiotics, and other pharmaceuticals in the milk which are costly medicines. With consuming such low-quality milk, public health gets disturbed, and such scandals threaten the US image in the international trade market.

After reading this article, I feel it is very unethical and hazardous for British people’s health and the US image in the international trade market. MPs must take this opportunity to inspect the trade secretary to cancel all trade deals to save public health. There is a strong need to develop and implement trade policies to avoid such types of scams.  (Dearden, 2018)