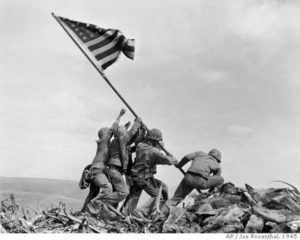 The respective picture, provided above, is taken by Joe Rosenthal, who was an American Photographer. This beautiful sight in the picture reflects the old memories of mid-20th century. Clicked on 23th February in the year 1945, during World War II, this amazing photograph is a depiction of the victory in the battle of Iwo Jima. This picture shows the happiness and the sign of victory by the forces of United States of America over the land of Iwo Jima in the territory of Japanese Empire (CNN).

During the fight between United States of America and Japan, United States of
America won the battle against the Japan, successfully capturing the Island of Iwo Jima. To show happiness and success of this mission, a flag was raised on the peak of the Mount Suribachi, which is among the highest mountain in Iwo Jima. A total of six Marines and Navy corpsman are captured in this photographer, raising the flag of victory on one of the highest mountain of the taken Island of Japanese Empire. This picture might look simple for some people but creates a very detailed image upon its back (CNN).

Because of this picture, Joe Rosenthal was awarded Pulitzer Prize for photography. It was the one and only picture to get this reward in the respective year. The picture holds great significance because of showing the reflection of the great World War II. The Heroes in the picture were belonging to the Marine department of the United States of America at one hand and one being from the Navy department of the United States of America. Harlon Block, Franklin Sousley, Rene Gagnon, Ira Hayes, John Bradley and Michael Strank were the heroes of the epic photograph of 20th century. Among these, Harlon Block, Franklin Sousley and Rene Gagnon were assassinated during some physical brutal encounter, and remaining three were, officially identified, as the official heroes of the World War II epic picture (U.S. flag raised on Iwo Jima).

This picture is nothing simple but shows the struggles and sacrifices done by the soldiers of the United States of America. Young teenage and early 20s boys, fighting in the navy, at the borders and through the marines is the reality of the World War II, and considering this, it must be kept in mind and respected that the peaceful world we are living in, is made from the sacrifices and blood of heroes in the past. This picture was awarded because the joy, the struggle and the whole end of the great World War II was made quite clear, from this single click by Joe Rosenthal, titling this photograph not just a picture but the reflection of the story of 1945 – international relations (CNN).