Mass Incarceration can be referred to, as the killing of masses of people, but looking at its literal meaning, it is associated with the imprisonment of a large number of people. ‘Mass incarceration’ can be broken down into two words in order to better understand the true meaning of the term; the first word of the term ‘mass’ is associated with a large group of people in society, the second word ‘incarceration’ is used to indicate the phenomenon of imprisonment. Therefore, it can be deduced that taking a large number of people in custody, or putting a comparative large population behind prison, is known as mass incarceration (Pettit, 2012).

Mass incarceration is part of history, especially during war time. It was used by the authorities to oppress dominating parties and soldiers in order to defend their nation. The practice was accepted in the past, because it was used as a justification, to reduce crime and to protect their nation/ state from any external threats they were expecting (Tonry, 2011).

Mass incarceration is a very old phenomenon, under which, imprisonment of people lost or found during war was carried out, where a great number of people were punished and demoralized.

According to a report by Pew Centers, five percent of the world population lives in the United States, but the rate of prison occupation is much higher than that, twenty five percent. In the years between 1987 and 2007, America has gotten the number of imprisoned people tripled, up to a figure of 1,597,127. According to an interview by Leon Neyfakh with John Pfaff, a professor at Fordham Law School, between 1975 and 1991, there was a dramatic rise in crime and because of that prison population went up, but between 1991 and 2010, crime started to decline steadily, but prison population still kept increasing (Neyfakh, 2015). Total number of inmates in 2008 compared to the total population of the cities of Kansas, Boston and Atlanta was much higher.

According to Professor Pfaff in the past thirty or forty years, legislators have passed tougher laws, a higher attention is being paid to drugs, but there are other reasons for increasing prison growth, for example only seventeen percent of inmates in state prisons are there for drug charges (Neyfakh, 2015). Fifty seven percent of the African-Americans living in North-Carolina are in prisons, whereas, only twenty one point five percent of African-Americans are in prison in the whole state. Such issues and ratio of city to state imprisonment, highlight that there has not been enough light shed on the reasons of mass incarceration.

5.Practices in United States of America

United States of America is one of the top three countries on the list, for mass incarceration rate, ranking in second place behind Seychelles. The population of prisoners in the United States of America is the largest, it is about three point five percent higher than that of Mexico which has been involved in an actual drug war for the past decade and currently, there are more people in prison in America, than there are in China; this information is indicative of a big problem of mass incarceration in the United States of America. The reasons for imprisonment are often cited as being, drug addiction, being poor and therefore, indulging in illegal crimes and lastly, mentally unstable (Wyler, 2014).

6.Mass incarceration before the 1960s till present

In the history of United States of America, Vietnam War, American Civil War, French Revolution War, Winnebago War, Mexican American War, World War I and World War II, these are few of the battles which have led to a large number of people to suffer from mass incarceration.

Before the 1960s, people were only imprisoned for the most heinous of criminal offences, such as for murder and theft. Thirty five years leading up to and including the 1960s, the number of people incarcerated was 52,249. In the next thirty five years, this figure increased to 1,266,243. Some historians and researchers have stated that, the increase in mass incarceration started from the 1960s. They link mass incarceration to the civil rights movement which began in the 1950s and lasted till the Civil Rights Act was convened in 1968. During this time, it has been said, that a mass incarceration of black people took place (PBS, 2014). These people were engaged in nonviolent acts of civil disobedience against segregation laws and were labeled as criminals, because they protested against the segregation of blacks and whites. According to Mark Brenner, the criminal justice system was used to control the social system by targeting the poor, working-class and color communities (Brenner, 2005).

The seeds of mass incarceration were set during the presidency of Richard Nixon, between 1969 and 1974, when crime was labeled as an urban problem; the cities were tainted as dangerous and majority of the American people were ready to apply the solutions presented by the Republicans. The changes included, endorsing stricter penalties for crimes, intensifying the scale of involvement in law enforcement by the government and modifying the local police departments to become more militarized. During this time, the government also beefed up its laws regarding drug-related offences; an example is the well-known legislation, the Rockefeller drug laws (Brenner, 2005). The effect of such changes during the reign of President Nixon can be deduced by the following graph; 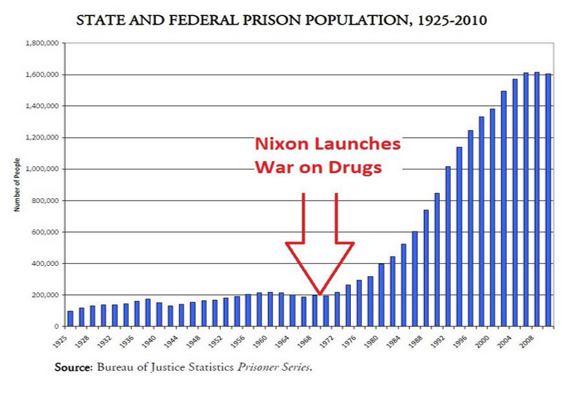 Fig 1. Increase in mass incarceration rate after the reign of President Nixon (Humphreys, 2014)

It should, however, be noted that the rate of mass incarceration started to increase after President Nixon retired from presidency, though it can be said that it laid the ground for the increase in mass incarceration to take place. During his time, the rate was below hundred adults for every hundred thousand people (Humphreys, 2014).

In 1976, the U.S. senate passed the first bill, whereby, a mandatory minimum sentence was introduced and similar state laws were then enacted, following the minimum sentence at the federal level (Thompson, 2010). This coupled with deindustrialization, an economic crisis and America’s farming crisis increased the number of people in the prison between 1980 and 1990 by 142% and by the end of the decade the number was nearly a million people behind bars. During Reagan’s presidency, the policy relating to mass incarceration was expanded further and the war on drugs became more intensified. It has also been reported that police brutality came about as an acceptable tactic for law enforcement (Brenner, 2005).

According to a report by Julia R. Gordon, between 1980 and 1990, the number of crimes that were violent, rose from nine hundred thousand to over a million (1.36 million to be exact), but between 1990 and 2001, the number of violent crimes carried out decreased, though the chance of an arrest resulting in going to prison increased by thirteen to twenty eight percent (Gordon). Not only that, but the time spent in the prison, by people who had committed violent crimes increased from thirty three months to fifty three months between the year 1980 and 2001. This resulted in an increase in the incarceration rate from around a hundred fifty to four hundred and sixty per hundred thousand people (Gordon). As discussed before, the policies regarding mass incarceration did not change during the reign of Bush and continued during President Clinton’s era of presidency. The following graph has been pasted from a journal article, published by the University of Chicago Law School; 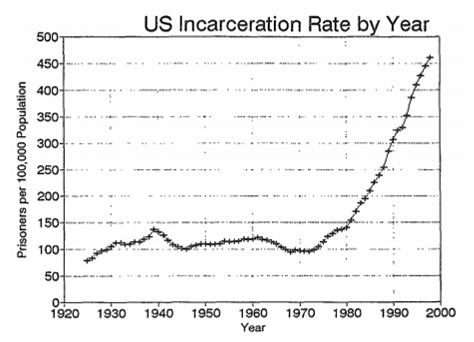 After the year 2000, since the intensification of war on drugs, Clinton’s administration introduced one of the most hard line legislation on crime, which resulted in more than $30 billion being spent on the construction of new prisons, hardware for police and recruitment of new police officers. This also resulted in people associated with drug crimes, being barred from receiving any state benefits, such as subsidized loans and welfare facilities. At the end of Clinton’s presidency, more than two million people were in prisons. The following graph highlights increase in incarceration rate between 2000 and 2012; 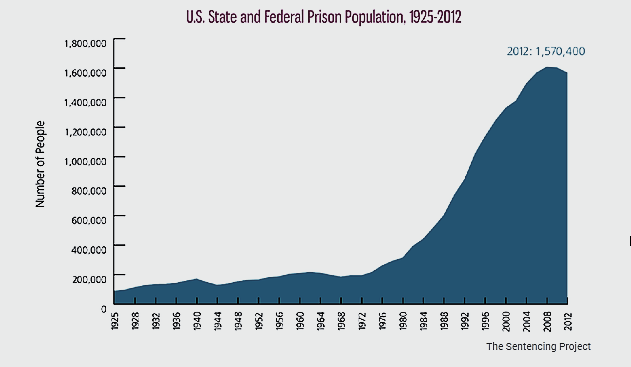 As seen above, the graph shows a period starting from 1990 till 2010, where the number of people incarcerated in America has increased significantly, but this rate starts to decrease from 2010 onwards. In 2006, the population in prison had grown more rapidly than the increase in resident population.

It is stated by most of the authorities, that mass incarceration is demanded by the nation as it is the sole reason for the success in the war against drugs. Therefore, the most viable justification in the twenty first century, for mass incarceration is that, it is used to stop crimes from taking place in the society. Drug smuggling, drug abuse, killing, rapes and accidents are all reasons for putting a large number of people behind bars, in the United States of America (Tonry, M. H. 2011).

In order to reduce crime and to secretly target the minorities – specifically blacks and Latinos – of United States of America, Mass incarceration was used in the past. In the present times, mass incarceration is followed up by the usage of different strategies by the authorities, ultimately, exploiting humanity behind mass incarceration and making it a negative practice, in the eyes of the people of society (Western & Wildeman, 2009).

8.History of efforts and the main cause of mass incarceration

Years of advocacy by many lawyers for release of incarcerated people in history have resulted in failure. During 1970s, America’s so-called “war on crime” resulted in an increase in the number of prisoners in jails, failing to result in the limitation of crimes conducted in society. The resultant programs enacted during the 1970s are now facing the threat of financial bankruptcy. Due to it, the following official steps have been taken as outlined below;

The steps taken by the officials have not resulted in limiting the crimes carried out, judiciary and law enforcement agencies have been forced to take harsher steps, which when practiced, has resulted in mass incarceration taking place, as denoted by the graph above (fig 3), between the period of 2000 and 2010.

Major problem with implementing laws against incarceration is that, they need to be passed by the congress and ninety three attorneys of the US government. It is very difficult for someone like, Attorney General Eric Holder Jr. in the present time, to convince the officials to do something about the problem of mass incarceration. Issues faced by Holder include:

There have been many protests at different levels, on different occasions against mass incarcerations, like in the case of Ala Moana shopping center on December 13, 2014 which started with thirty people and then expanded to seventy cities, with thousands of protestors.

A lot of human right and civil right movements have taken place regarding this issue, but have been ineffective. The Criminal Justice System needs to be revised by the Congress in order to introduce reforms that, nub the main root of the problem of mass incarceration. I believe, the government needs to incorporate corrective efforts, before the crime takes place, rather than employing such measures i.e. imprisonment, after the problem has occurred i.e. criminal activity.

Brenner, M. (2005). The Long Shadow of Mass Incarceration: A Generation Imprisoned. from http://www.solidarity-us.org/node/63

Humphreys, K. (2014). You Can’t Kick Nixon Around For Pot Crackdowns and Mass Incarceration. from http://www.samefacts.com/2014/04/drug-policy/you-cant-kick-nixon-around-for-pot-crackdowns-and-mass-incarceration/

Neyfakh, L. (2015). Why Are So Many Americans in Prison?   , from http://www.slate.com/articles/news_and_politics/crime/2015/02/mass_incarceration_a_provocative_new_theory_for_why_so_many_americans_are.single.html

PBS. (2014). Michelle Alexander: “A System of Racial and Social Control”. from http://www.pbs.org/wgbh/pages/frontline/criminal-justice/locked-up-in-america/michelle-alexander-a-system-of-racial-and-social-control/

Wyler, G. (2014). The Mass Incarceration Problem in America. from https://news.vice.com/article/the-mass-incarceration-problem-in-america

The Travelers Guide to Morocco.” Culture, Religion and Customs of Morocco Research Paper